A police detective who quilts?  How silly is that?  We all know that detectives are hard drinking, chain smoking, cynical guys, or maybe occasionally mustached fops who use their little gray cells to solve crimes. But a detective who quilts with her girlfriends on Tuesday afternoon?  I asked Sgt. Katie Kelly if she thought that these two aspects of her life had any connection to one another.  “Absolutely!” she said.  “In the same way that a the beauty of a scrap quilt relies on putting the right things next to one another, solving a difficult case is all a matter of seeing things as connected.  Sometimes when we were laying out a quilt, it just didn’t gel, and then Abby would take one piece and turn it upside down, and bingo!  It was perfect.  And the same was true in Isaac’s and my investigation of the murder of Dr. Friesen.  When we could see which aspects of the case belonged together and which didn’t belong there at all, everything became clear.” 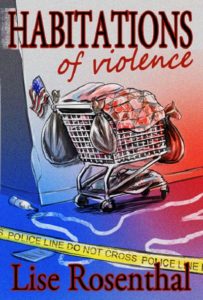 “A person can’t even lay his head down on his own planet,” says Squirrelly the homeless man, during Sgt. Katie Kelly’s investigation of the fatal shooting of Sparky, another denizen of Fresno’s world renowned homeless population. Kelly and her partner Sgt. Isaac Flores explore every possibility, but the victims continue to fall. Every approach seems to lead to a dead end. Is the killer from the local Satanist community? Is he the suspiciously disgruntled citizen who keeps popping up wherever they look? And what about Los Aztecas, the up and coming gang (or perhaps cultural group) with whom—to Flores’ great dismay—his son has become involved? In the course of her investigations, Kelly meets and encourages youngish lovers Lexi and Lucky who are struggling to get clean, sober, employed and housed. But just when things are looking hopeless, the Tuesday Afternoon Quilters come up with a different perspective. Can Kelly and Flores identify the killer and stop him before he strikes again?

The sun was just rising over the warren of dilapidated buildings and narrow alleys that Fresno’s homeless call—for lack of a better term—home, as Rochelle and Elizabeth approached Poverello House. “What if I leave you and the bags of underwear at the front door and go park the car around back?” suggested Rochelle. “You can drop off the men’s stuff and then we can go together with the ladies’ bag over to Holy Cross, and afterwards pick up Mary and Al and head down to the Hall of Records.”

“Sounds like a plan,” answered Elizabeth. “I’ll meet you back here in a few minutes.”

Rochelle pulled the car into the back lot of Poverello and walked quickly back toward the front of the building. Her compassion for her homeless neighbors did not blind her to the fact that sometimes their inner demons made them angry and violent—often without much apparent reason. Her thoughts were interrupted by shouts from an adjacent alley.

“Man, I didn’t get a chance to charge it last night. It’s as dead as Sparky is.”

Rochelle broke into a jog. “I’ve got a phone,” she called. “What happened?” The group drew back, and she saw what looked like a pile of ragged clothes thrown down on the pavement—with a bullet through its head.

Buy A Stitch in Crime